A couple of days ago, I need to write a code to pack a bunch of image files into one. And my friend told me this good tutorial to start with.

On that tutorial, the writer doesn’t post any example code, but it seems many have implement the pseudo code posted there. So, I wrote my own code based on that pseudo code.

I wrote the code in Java, and it’s very easy to understand just like the pseudo code.

And here’s the sample image result I’ve from using that code. 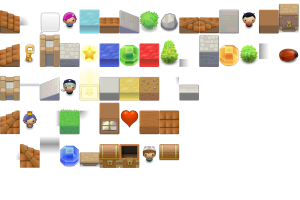 All that images file are from Danc’s Site LostGarden.

And here’s the class I’ve wrote:

Since last week, I’m trying to learn ActionScript 3 (AS3) language to create a game.

I use Linux as development platform, and there’s not much IDE available for AS3 for Linux. FlashDevelop for linux is still in the middle of development last time I check. And I don’t want to use Adobe Flash IDE on Linux using wine. There is a FlexBuilder for linux from Adobe site, but that project is still in alpha 4 stage since last year, I’ve tried it but I think I’ll stick with AXDT for now.

After looking in the net for a good editor for AS3, i found OSFlash website. And from reading that site, I found out that there’s a good plugin for Eclipse IDE called ASDT, which only support AS2 development not AS3. Luckily, that project is now evolved into AXDT which give a full support for AS3 development within Eclipse IDE.

So, my next step is finding a good game engine for me to use. After googling for a while, I want to try using PushButton engine. There’s a nice tutorial to set it up using Eclipse and Adobe FlexBuilder though, but that tutorial is for Windows and I’m failed at implementing that tutorial in Linux. Probably I’ve some how made a mistake when following that tutorial. END_OF_DOCUMENT_TOKEN_TO_BE_REPLACED